How many First Timer Buyers in Bicester Bought Their First Home in 2017? 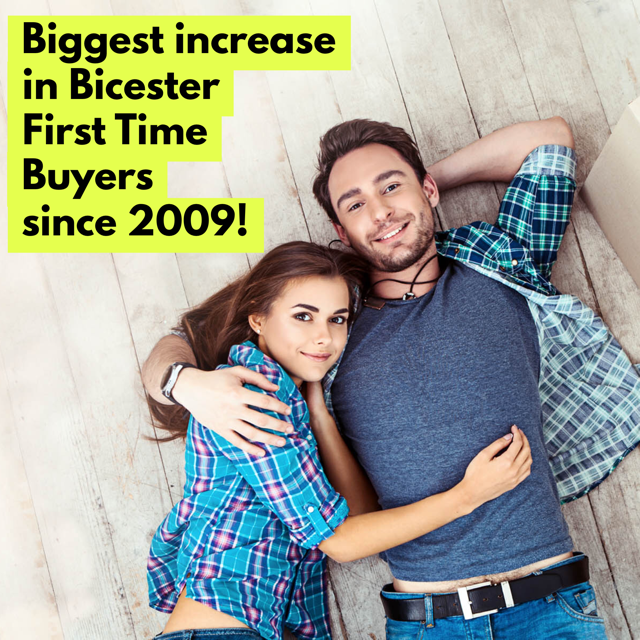 A little bit of good news this week on the Bicester Property Market as recently released data shows that the number of first time buyers taking out their first mortgage in 2017 increased more than in any other year since the global financial crisis in 2009. The data shows there were 205 first time buyers in Bicester, the largest number since 2006.

I expect in 2018 that this increase of first time buyers will level out and maybe dip slightly as, nationally figures demonstrate that first time buyer’s average household income was £40,691 and this represented 17.3% of their take home pay. Although, it might surprise readers that it is actually cheaper to buy than it is to rent at the ‘starter home’ end of the housing market. Many of you can remember mortgage rates at 12%, even 15%. Today, at the time of writing this article, there are up to 151 first time buyer mortgages available at 95% LTV (loan to value) with rates starting at 2.49%.

In terms of the level of mortgage debt in Bicester, looking specifically at the OX25, OX26 and OX27 postcodes, you can see from the graph there has clearly been a steady rise in borrowing over the last few years. 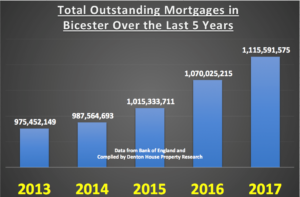 This is pleasing to see, as new mortgage debt is created by first time buyers, buy-to-let landlords and home movers themselves, that is being roughly equalled by the amount being paid off with mature mortgaged homeowners in their 50’s and 60’s finally paying off their mortgage.

So, what does all this mean for the Bicester Property Market?  Well, the stats paint a picture, but they don’t inform us of the whole story. The upper end of the Bicester property market has been weighed down by the indecision around the Brexit negotiations and rise in stamp duty in 2014, when made it considerably more expensive to buy a home costing more than £1m. A lot of Bicester residents have been affected by issues of mortgage affordability and lack of good properties to buy, as selling prices have reached the limit of what buyers can afford under existing mortgage regulations. Bicester Buy-to-Let landlords were hit by tax changes, although this has been offset by the increase in first time buyers.

If you are in the market and selling now and want to ensure you get your Bicester property sold, the bottom line is you have to be 100% realistic with your pricing from day one and you might not get as much as you did say a year ago, but the one you want to buy will be less too so it’s swings and roundabouts. I know it’s not comfortable hearing that your Bicester home isn’t worth as much as you thought, but Bicester buyers are now unbelievably discerning.

So, if you are thinking of selling your Bicester property in the coming months, don’t ask the agent out a few days before you want to put the property on the market, get them out now and ask them what you need to do to ensure you get maximum value in the shortest possible time. I, like most Bicester agents, will freely give that advice to you at no cost or commitment to you.